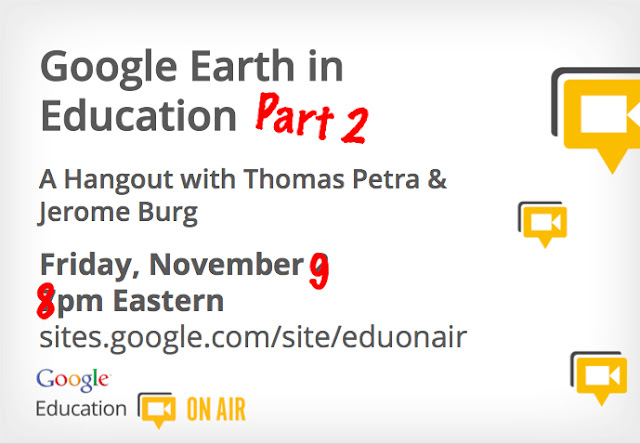 Join the creators of Google Lit Trips (Jerome Burg) and Real World Math (Thomas Petra) for another conversation on Google Earth's role in education.  Forty-five minutes wasn't enough time to cover all of the topics that we wanted to, and so we are adding another hangout date: Friday, November 9 at 8pm Eastern.  We'll be discussing further the development of our websites, favorite features, strategies for implementing geo-lessons, the future role of Google Earth in education, and much more.

Once again, this is a Google Edu On-Air Hangout that takes place on November 9 at 8pm Eastern on Thomas Petra's Google+ page.  You can post questions live during the Hangout or tweet them in advance to @RealWorldMath or @GoogleLitTrips. Use the Twitter hashtag #earthedu.

In case you missed Part 1 of the discussion, the video is provided below.


Tweet
Posted by Thomas Petra at 1:11 AM No comments:

If the most common solution to solving a problem is to throw some money at it, then the equally common response is "We don't have enough funding."  It would be fair to anticipate this sort of reply even more so in a time of a national economic crisis, but surely we can scrape together a few cents for those things that are really important - like, for instance, Education or maybe a flooded city.

Now, I'm not saying that money solves all problems, but there is evidence all around us of how times are tough and perhaps some extra cash couldn't hurt.  (Have you been to Staten Island lately?)  Yes, things are getting better.  The economy seems to be steadily recovering, but for quite a while it would seem that everywhere you looked peoples' out turned-pockets were empty, that is, unless you were supporting a political campaign.

According to The Sunlight Foundation, a nonprofit, nonpartisan organization, the amount of independent expenditures for this election has amounted to over 1.2 billion dollars.  Independent expenditures are primarily the campaign ads for television or radio that we have enjoyed so much (cough) in the past year.  This is money that has been raised by political non-profits, unaffiliated party committees, political action committees, and Super PACs.  What's made this election so different from the past is the introduction of the Super PACs.  Since the U.S. Supreme Court decided in its Citizens United case that corporations have a right to free political speech, Personal Action Committees could now raise unlimited funding to support campaigns, provided they didn't coordinate with the candidates.  You see, corporations are people, my friend.  There are almost a thousand Personal Action Committees today, but while the initial concern was that large corporations would be indirectly funding the campaigns, that hasn't been the case.  The Center for Responsive Politics reports that 80% of the PAC money has come from the top 100 individual donors, while less than 0.5% was contributed by publicly-traded corporations.

Since the beginning of 2011, Super PACs have raised a total of $623,588,019.71.  According to Sunlight, 75% of that money is spent on negative campaign ads.  The three largest Super PACs combined have raised almost half of the total PAC money: Restore Our Future ($142,645,946), American Crossroads ($99,828,397), and Priorities USA Action ($66,182,180).  The two largest PACs support Mitt Romney, while Priorities USA Action supports the re-election of President Obama.  So it would seem that if a worthy cause came along, there is some money out there that can be generated.  That's good news if you are Karl Rove or live in Hoboken, N.J.

During this campaign season, I have been dismayed at how little education has been raised as a campaign issue.  President Obama supports recruiting more Science and Math teachers, and he has made it easier for college students to get student loans.  I'm never sure of what Mitt Romney says, but regardless, neither candidate has come forward with a thoughtful plan towards the education reform I feel is needed.  Education reform needs leadership and ideas more than it needs money, but I'm sure any district would benefit from a stronger budget.  Maybe all of those Super PAC donors can help?  There are over 50 million students enrolled in elementary to secondary schools in the United States. If the $623,588,019.71 of SuperPac money was split equally among the 50 million students in the United States it would only amount to $12.47 per student.  That doesn't seem very impressive, but what else could it buy that might help schools?  Here's a list I came up with; you may want to add your own in the comments.

In just a few days all that loose cash will be freed up for other purposes.  Instead of that bake sale, consider a more ambitious approach and start your own Super PAC for Education.

I'm District 671 and I approve of this message.

Posted by Thomas Petra at 11:42 PM No comments: