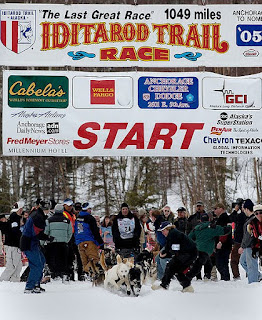 Another year has passed and I don't know if I can say that I'm going strong but the RealWorldMath.org seems to keep finding users. The counter now shows over 66,500 viewers, so either I find around 20,000 users each year or I have a lot of repeat visitors. I hope it's some of both. I continue to get messages from around the world and for those I am grateful. Please give me feedback on how the lessons worked for you or what you'd like to see in the future.

To commemorate the anniversary of the site, I've added a new lesson: The Iditarod Challenge. This lesson has students calculating and adding elapsed time in a virtual sled dog race across Alaska. This is a long term activity that doesn't take a lot of classtime to do but it will last at least a month.

I've also added some Google Earth tutorial videos. These were made by me using the animation creator at xtranormal.com. The videos are in Google Earth Kmz file format because they are intended to be viewed within Google Earth. Students will be able to look over the Google Earth toolbar and side menus as the videos make reference to them. You can view all of the above on the Updates page.

Too many things to do and too little time, but I hope I can get more lessons up this year. Don't forget that you are invited to submit your creations to the website also. Enjoy the site and I hope to hear from you soon.
Posted by Thomas Petra at 2:32 AM No comments:

Inspiration lies at the tip of your nose 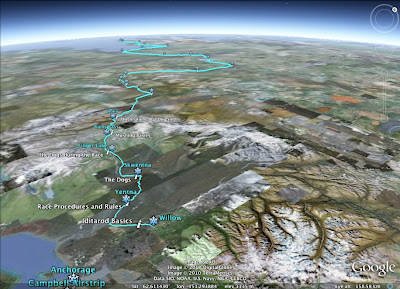 Well, it's taken awhile, but a new Kmz is available on RealWorldMath.org. The Iditarod Challenge activity had been in development for several months. People have asked where I get ideas for some of the lessons, so this might serve as a good example.

My daughters are strange. They enjoy Disney movies, but they like nature documentaries, Cirque du Soleil videos, etc. just as much. I rented The Discovery Channel's 6-part documentary Iditarod: Toughest Race on Earth, and my kids were hooked. Alaska is a bit different than Guam, so it was an educational experience for them just to see someone who is cold. They quickly got caught up with the terminology and strategy of sled dog racing, as well as the personal stories of the mushers. Somewhere along the way something clicks in my head.

First, I looked at Alaska in Google Earth. The views in Google Earth of populated areas are very good but often remote regions don't get the same quality of imagery. Alaska is one of those places. It looks a bit like a patchwork quilt; some areas are snow covered and some appear to be in a fall bloom. I also looked at the terrain from a low viewpoint. The lesson I have in mind is a virtual dog sled race.

Distances between Iditarod checkpoints are a set value, so using the ruler tool across 1,000 miles of Alaska didn't seem like a good idea. I decided the distance formula would lend itself best to find the traveling times between checkpoints. No two dog teams are alike but that doesn't help in creating a standard for a class. If the rate is given then the only variable to solve for is time. So, the lesson is primarily about calculating and adding elapsed time.

Next I start educating myself on the subject and creating the Google Earth file. I was fortunate to find online a good mapping of the route the race takes, so I created a path and starting marking the race checkpoints. I found some race data from the past that gave the distances between the checkpoints and average rates traveled. Around here I realized that every student would finish at the same time using the given values, provided they did everything correctly. Thus, Fortune Cards were added to the lesson: some sort of situation is drawn from a deck that affects the rate of travel. Cold weather adds speed to the sled while diarrhea slows the dogs down. Now the race has become a game of chance but the lesson's objective stayed the same.

I try to add more to my lessons than just math ideas. In this case, it is a geography lesson on the race event. Subjects such as the dogs, how the race is managed, how does a sled work, etc. become secondary objects to the lesson. The Discovery Channel video was a good primer, but I spent days researching the Iditarod and deciding on the best sources of information available on the web. This would include Iditarod.com - The Official Site of the Iditarod, and ultimateIditarod.com, both tremendous sites with loads of information. I ended up gathering so much information that I added placemarks to the lesson to hold it. So, I decided a WebQuest would have to be a part of the materials included with the lesson. I want the students to link themselves to the event without a lot of direction. In my mind, this provides them with an opportunity for self-education and a chance to construct meaning out of the lesson. This is one of the primary goals of Real World Math.

Now the hardest part is assembling all of the information in an attractive package that works. HTML script is written for all of the placemarks, links need to be made and tested, and any paper work has to be created. I scour the Internet for photos for embellishment. The tricky part about that is I don't use unauthorized material, so I need to find photos that are not copyrighted. Wikipedia normally has these types of photos and if you can find anything done by the government you're good to go. I try to always give credit to any site whose material I use, and I provide a link to their page.

Finally, it's time for testing and my classes are normally the best way to do this. After the activity is over, I may make refinements to the materials, but more importantly I need to consider how to assemble it for public consumption - you! It isn't that hard to come up with lesson ideas. The hardest part is finding the time to put it all together.
Posted by Thomas Petra at 1:17 AM No comments: