By the time you're reading this, Real World Math may have already moved to it's new home.  Since MobileMe is no longer doing web publishing for Mac's iWeb, I've been forced to look for a new host.  After some deliberation I've gone with Weebly.  The URL for the site will still be RealWorldMath.org.  It seems that I'll be able to make the upgrades to the site that I've been wanting to make for some time now.

Key among this is allowing students access to the site to retrieve downloads for Google Earth, while at the same time restricting them from all of the teachers' content.  I'll be accomplishing this by password-protecting some of the pages.  Hopefully it will make for a blended experience for anyone who visits the site.

I've been working on this for a while now, but there's still work to do.  I had forgotten how much content was on the site!  The framework is in place so what I mainly need to do now is add the downloadable materials.  While doing this, I've realized I need to make upgrades and edits to most of the material.  This will take longer than I anticipated, so please bear with the mess while I sort through it all this summer.  Hopefully you won't find too many files unavailable.

As I mentioned before, the teacher portion of the site will be password protected.  Teachers will be able to send a request for the password via a form on the site.  But I need a password!  How 'bout it?  Any suggestions?

See you on the other side!  Hope you like the new layout.


Posted by Thomas Petra at 7:07 PM No comments:

Ever wanted to create a lesson for your students using Google Earth?  That's the subject of my PD in your PJ's presentation this weekend.  Mine is just one session of many being brought to you by the guys from The State of Tech.  The entire conference is being held as a series of Google+ On Air Hangouts.  You can choose to participate in the live presentation or just watch it as a spectator.  Fill out this form if you want interact and ask questions live during my event.  I'll be sharing a lot of information from basic to advanced with you, but I hope to have a lot of time for Q&A.  If you're interested in using Google Earth next school year, then now's the best time to start your PD.  I hope you can join me.

Session Description:
Go beyond the virtual tours and utilize Google Earth to its fullest potential.  This presentation will give you tips on how to design learning experiences with Google Earth.  You'll learn how to add and format your own lesson content, how to use Google Earth's tools, how to share your work with students, and lots of simple ways to make your work shine.  Make Google Earth the learning environment your students crave.

Posted by Thomas Petra at 12:19 AM No comments:

PD in your PJ's

The State of Tech “PD in your PJ’s” Online Conference

Announcing the first ever “PD in your PJ’s” free online Ed-Tech Conference, Saturday June 16th 2012, brought to you by The State of Tech podcast, ITIP Ohio, and Google in Education.

No travel, no hotels, no meals, no subs, no registration costs, and no fancy clothes needed. Instead this conference is totally free and totally online!
Conference website: http://pd.thestateoftech.org
Please visit the site today to check out the great scheduled sessions, and pass this along to all the educators you know.  If you use Twitter, please use the hashtag #pdinpjs

Conference organized and led by The State of Tech podcast - http://www.thestateoftech.org
Special thanks to ITIP Ohio - http://www.itipohio.org - for co-sponsoring this event, and Google in Education - http://www.google.com/edu - for providing Hangouts On Air.
Posted by Thomas Petra at 12:06 PM No comments:

The future of Google Earth

When I was at the Google Teacher Academy a little over a year ago, I had the opportunity to ask one of managers what Google Earth would look like in five years.  I have a vested interest in the product, not only because RealWorldMath.org relies so heavily on it, but also because I model 3D buildings for it.  They passed on the question at the time, but after listening to Brian McClendon's press event for Google Maps today, it would seem as though I have my answer. 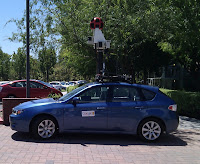 The VP of Google Maps outlined the progression of Google Earth and Maps throughout the 7 year history of their development.  He said that Google's mapping applications have been built around the principles of comprehensiveness, accuracy, and usablity.  No doubt, Google has gathered the most comprehensive geo-data in the world.  It's quite astonishing when you see how far Google's mapping efforts have come in a relatively short time when you consider the subject matter is the world.  In 2006, 37% of Google Earth was covered in high resolution imagery.  McClendon states the number today as 75%.  In 2008 Google had mapped 13 million navigable miles in 22 countries.  By 2012, the number had increased to 26 million miles in 187 countries.  This increase comes in large part from the contributions of users from around the world.  Additionally, 5 million miles have been gathered for the Street View.  Street View has always seemed to me to be a sign that Google was not going to rely on user-supplied content forever.

This makes sense and provides one of the clues as to why Google sold SketchUp earlier in the year.  It's also a bitter pill to swallow for me personally.  I am one of the thousands of people who uses SketchUp to model 3D buildings.  I would like to think that the 53 models I've done for Google Earth are of the highest quality; but, I'll admit that some are much better than others.  The disparity is even greater when you compare the work of the master modelers with the novices, and when you consider that not all models are geometrically efficient.  If Google wants a product that is consistent and accurate, then it isn't in their best interest to rely on the work of hobbyists.  [Ouch, that hurt to write.]  And so, it would seem now that the geo-technology has once again reached a breakthrough moment.

Peter Birch, Product Manager for Google Earth, skirted around these points, although SketchUp was never mentioned by name in the entire presentation.  He shared a demonstration of Google's new textured 3-D mesh rendering.  We saw an early version of this "automated technology to extract 3-D from aerial images" in Google's Building Maker.  I wasn't a fan of this modeling technique at the time because, although it was easy to model with, the results were no substitute for buildings modeled with SketchUp.   But Google's current version provides the solution that is comprehensive, consistent, and accurate.  It uses a much greater amount of data called "oblique imagery" that is collected by planes.  The photo imagery of a city is gathered from all angles in a series of gridded flight patterns.  Next "stereo photogrammetry" constructs the 3D models out of a textured 3D mesh from the images.  It was an impressive demonstration and showed just how far Google has come since Building Maker.  Now Google can create a 3D city that is complete without the gaps of missing buildings, has a consistent textured appearance, and it will be deliverable across all devices.

This is just the beginning.  Google has only mapped a dozen or more cities around the world with this technique but as they so obviously demonstrated - there doesn't seem to be a limit to the growth they can accomplish in a matter of years.  When SketchUp was sold, I had a feeling my modeling would become obsolete.  It remains to be seen what extent this will come to fruition, but I anticipate I'll be reduced to the 21st century equivalent of modeling a ship in a bottle.  It makes me sad and a bit angry when I think of the hours that so many users contributed to help create much of Geo Google's value without any thought of compensation.  At the same time I am envious of Google's ingenuity and the prospect of the future.  Indoor maps for subway stations, hiking trail maps, and a greater amount of interactive tours are on the near horizon.  I suppose the lesson learned is- if you're going to embrace technology, then it doesn't make sense to stand in the way of progress.

You can see the full press conference below.  The stereo photogrammetry is covered at 37:40

Posted by Thomas Petra at 11:44 PM No comments: