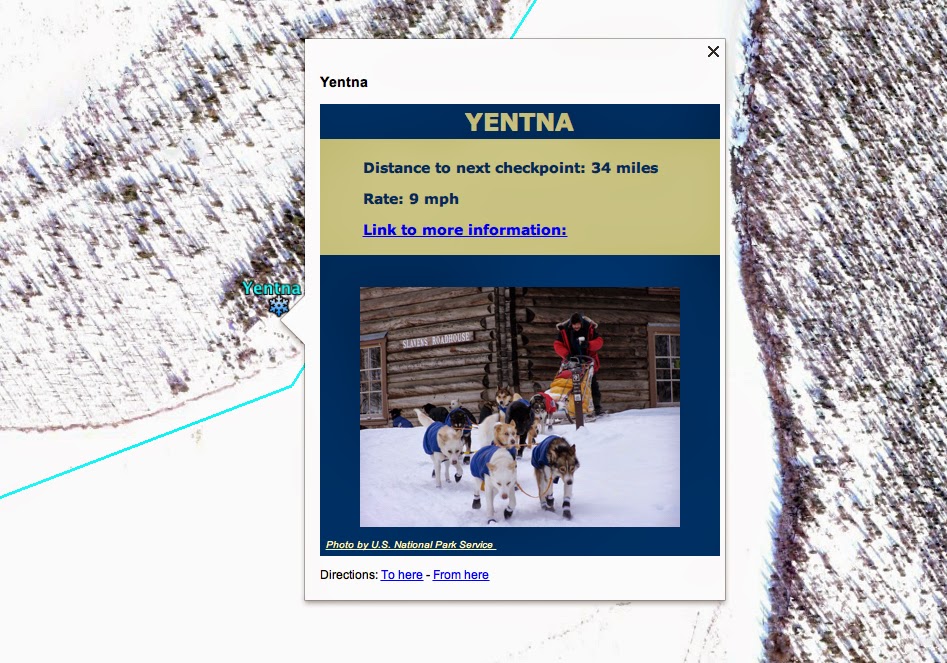 Big news from Alaska.  The 2015 Iditarod Sled Dog race has been moved north in favor of better conditions.  The race traditionally starts in Anchorage with a restart in Willow, but this year's lack of snow and thin ice has forced race officials to err on the side of caution.

Considering the amount of preparation a race like this requires, this is a pretty big deal.  Usually, the race alternates routes between a Northern route in even years and a Southern route during odd years.  As far as I understand, this allows for some of the more southern towns a chance to take part of the spectacle.  With this year's changes, towns such as Shageluk, Grayling, and Iditarod are going to have to wait another two years to see the mushers come through.  On the other hand, for only the second time in history, the race will have its restart in Fairbanks and run through Nenana, Tanana, and Koyukyuk and others before joining the normal course in Kaltag on to Nome.

The dog teams don't typically expect fans to line the entire race course; after all, the race is over one-thousand miles long.  The course isn't marked the entire way but I believe it is broken in by snowmobiles.  They must really be scrambling to pull this off with 18 days to go.  Plus, this will mean a lot of people are going to have to change their travel plans.  The Iditarod Air Force will be flying dog food and supplies into areas they probably aren't familiar with.  Additionally, race officials, media, veterinarians, and other support personnel will also have to adapt.

Fortunately, the original trail is all set and ready to go in Google Earth.  There's plenty of virtual snow for you and your students in RealWorldMath.org's Iditarod Challenge.  You can choose to honor the traditional southern route this year, or take the northern route if you wish.  Real World Math's Iditarod Challenge has students competing in a virtual sled dog race in Google Earth.  Each student gets to mush a team of sled dogs across Alaska from the comfort of their computers.  They'll use checkpoint information from the Google Earth Kmz download and the distance formula to calculate race times for each leg of the journey.  They'll also face a variety of hazards and good fortune along the way for a personalized race experience.  I'm gearing up a class of 6th graders for it now.  With over 20 checkpoints, it will take them just 10 minutes a day but over four weeks to complete the challenge.  Hopefully we'll get to Nome around the same time the mushers will.

Let's go, the dogs are waiting!


It's that time of year when our friends in Alaska are making the final preparations for the Iditarod Sled Dog Race.  I've been doing likewise by updating Real World Math's Iditarod Challenge and all the accompanying materials.  This is a great project based learning activity for students in grade 5-8, and one that lends itself easily as an interdisciplinary lesson.

Real World Math's Iditarod Challenge has students competing in a virtual sled dog race in Google Earth.  Each student gets to mush a team of sled dogs 1049 miles across Alaska from the comfort of their computers.  They'll use checkpoint information from the Google Earth Kmz download and the distance formula to calculate race times for each leg of the journey.  It wouldn't be much of a race if everyone used the same information, so a set of Iditarod Fortune cards will personalize triumphs or tragedies along the way.  They might find an angry moose in their trail or smooth packed snow ahead.

The Iditarod alternates routes every year between a southern route in odd years and a northern route in even years.  I've updated the downloads now by adding a southern route, which is the one you should be using this year (although its seems Mother Nature has other plans).  You'll find other materials have been updated also.  The Student Checkpoint Sheet, where students keep track of their elapsed times between checkpoints, is also available for the southern route.  The Master Iditarod Time Sheet has also been updated and is offered as both an Excel spreadsheet and a Google Sheets version.  I haven't fully tried out the Google version yet, but I think it might work better since I can add negative values for elapsed time adjustments.  These spreadsheets will help you keep track of your students' times and check their work.  The real race starts on March 7th, so now is the time to download and get familiar with the materials.

There are around 24 checkpoints for the race.  Once the students have learned how to fill out their time sheets, it should only take 10 minutes of your class time to complete each leg of the race.  The Iditarod Challenge will take over four weeks to complete if you limit it to one checkpoint per math class.  For me, an extended learning event is one aspect of project-based learning, but it should also include other components.  A lot of information and links to online content about Alaska and the race can be found in the Google Earth file.  You'll have great opportunities to add web quests or incorporate Social Studies lessons with it.  Ask your PE teachers to get involved and have your  students find out what it's like for the dogs to pull someone around.  Gamify students' learning by posting a leaderboard in the room.  I've given out awards at the end of the event, including oversized phony checks and a Red Lantern Award for the last place finisher.

As always, I welcome any feedback you have on my materials.  Let me know what works and what doesn't.  Please share the activity with others.  Use the Twitter hashtag "#RWMiditarod" to let us know how it's going.