The Eagle has landed... 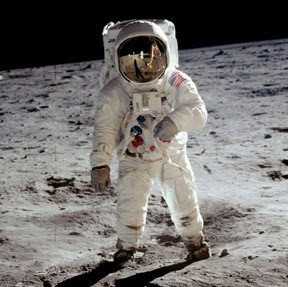 I'm happy to announce the addition of some lunar content to RealWorldMath.org. A new branch of lessons will be devoted to Space. Lunar Fieldtrip is a tour of the moon created in collaboration with Pam Eastlick from the University of Guam Planetarium. The activity is meant as an introduction to the Google Earth's Moon add-on. On Google's Moon, you can take tours of Apollo landing sites, view 3D models of landed spacecraft, watch video footage of Apollo missions, and browse content in an assortment of placemarks.

Lunar Field Trip takes the viewer on a futuristic field trip hosted by several high school students from the class of 2040. The students narrate the tour in a series of videos starting at their lunar base and continues through peaks, craters, and Apollo landing sites. 3D SketchUp models of futuristic Armstrong City, Lunar Stadium, and more are included in the Kmz download. It's hard to say whom the targeted audience for this activity is for since many persons, young and old, have become unfamiliar with the lunar missions of the past. This may work best in a Science classroom but lessons extensions for Math, Geography, or English can come from this. For now, I have two spin-off lessons from the Field Trip in the works: Lunar Sports and Rockets.

Google has enhanced the Google Earth platform with add-ons for the Sky, Moon, Mars, and Oceans. I expect RealWorldMath.org will be touching down on all of these areas in the future.
Posted by Thomas Petra at 4:18 PM No comments: 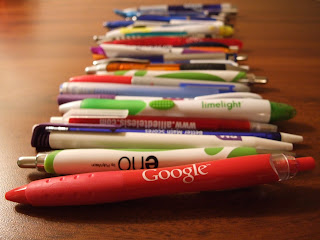 I am still recovering from June's ISTE convention held in Denver. If you are unaware, ISTE stands for International Society for Technology in Education. Each lesson page in RealWorldMath.org has a listing of the corresponding ISTE 1998 or 2007 standards for students in the left side bar. According to their website,"ISTE is the premier membership association for educators and education leaders engaged in improving learning and teaching by advancing the effective use of technology in PK-12 and higher education." I have been aware of the organization and its standards for several years but I have only recently become a member. This was the first ISTE conference I had been to, so I wasn't sure what to expect.
To begin, the organization is larger and more advanced than I had thought. Over 15,000 members and exhibit presenters somehow managed to fill the massive Denver Convention Center. There was a plethora of workshops, lectures, and presentations large and small, as well as several hundred industry exhibits. Although I thought I had planned out my visit fairly well, I was mistaken. There was just too many interesting events to attend at the same time. To say that the convention was an eye-openers for me is an understatement. I found that I have been ignorant of the many advances in technology for education and, as always, there is much to learn.
What I found concerning though was the promotion of certain "smart" technology for schools. There is a group of companies that have developed curriculum software systems for smart boards or computers in general. These systems have many positive attributes including the provision of instant feedback to students, tutorial systems, and the ability to create lessons, quizzes, or tests all correlated to states' standards. What I found troubling about them was their focus on assessment. All of the materials were developed for multiple-choice formats so I wonder how well they promote learning above the lowest levels of Bloom's taxonomy. Some of the companies developing these programs are the very same companies that produce standardized tests. As to whether these are ethical dilemmas or not, these are issues I will be trying to sort out in the future.
What I do know is that I will strive to become more acquainted with ISTE's vast amount of resources, including the network of IT educators from around the nation. RealWorldMath.org will continue to promote the higher levels of thinking - analysis, synthesis, and evaluation - in its lessons and activities.
Posted by Thomas Petra at 12:47 PM No comments: