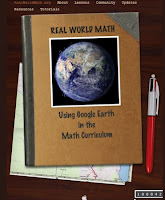 Today, I was quite pleased to see that RealWorldMath.org has topped 100,000 visitors. This by far surpasses my expectations of what the site would accomplish. RWM will be 3 years old in April and with this amount of interest I am encouraged to do more.

I came across some research that states that the use of technology in the U.S. classrooms has increased so much that the schools can't keep up. This is both encouraging and alarming. The report, entitled "Deepening Commitment: Teachers Increasingly Rely on Media and Technology" was done by PBS and Grunwald Associates, and was released at the 2011 FETC convention. Among the relevations is that "97 percent of K-12 teachers use digital media in classroom instruction. Sixty-two percent report using it frequently, and 24 percent report using it daily." I am not surprised at the students' appetite for digital media and technology but I am surprised that teachers have become more earnest in its use. Perhaps the tide is finally turning for more meaningful and contemporary curriculum. Unfortunately, it would seem that the schools' budgets can not keep up. Like the rest of us, they are trying to stay abreast of current technology systems and bandwidth. Interactive whiteboards are cited as the most used and sought after device.

Perhaps this report and Real World Math's success are linked. Einstein said, "We can't solve problems by using the same kind of thinking we used when we created them." I believe that technology and not standardized testing is the key to meaningful school reform. I hope RWM offers a more modern and meaningful approach to math instruction. It may not relate directly to a bubble-test but I do believe that it presents mathematics in a way that stimulates thought processes and enables students' comprehension on a more personal level.