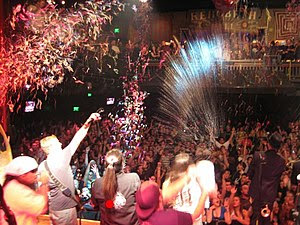 Image via WikipediaHappy New Year to everyone.  I was thinking about a resolution for 2012 and I've decided on a different take of a familiar one.  I'll attack my growing waistband in 2012 by making it the year 201/2.  That is - I'll only eat half of the food I normally eat.

How's that for a simple diet?  If I have a sandwich, I'll just eat half.  If I have a plate of food, then I'll just use half the plate (no fair stacking).  I think it'd be fair to indulge myself with an entire orange and whatnot, but if I have a soda ... then only half.  Not sure if I could write a diet book on this approach, but I think I'm on to something.

One of the causes attributed to the obesity epidemic in the America is the increase in portion sizes.  Apparently this is a phenomenon that has been on the rise since the Last Supper.  Put simply: we eat more than our body needs.  Perhaps this is a downside of our modern society, the shift from an agrarian to a consumer culture.  People have come to expect a large amount of food as the best value for their dollar, and it isn't just the fast food industry that's to blame.  Researchers have found that even at the all-you-can-eat buffets, people will choose the largest plates available.  I've been amazed by the portion sizes that come out from the Kids' Menu at many restaurants.  It's definitely more than my children need to eat.  Were you raised to finish all the food off your plate?

I've always thought that schools don't spend enough time teaching nutrition.  It's a popular topic in the primary grades but there doesn't seem to be room for it in the middle or upper years' curriculum.  Why is that?  Can you think of a more important topic than health?  I think nutrition topics are a perfect fit in Math, Science, and P.E., but why stop there?  The history of food could make for a fascinating project.

So while I'm halving my food intake why don't you double your efforts on teaching nutrition in your school.  Good luck to all of us!


Here's a link to an old Google Site I made called Nutrition on the Go!  It connects students with the menu pages of fast food restaurants and has them put meals together for the nutritional content.  It didn't fare well when Google revamped their website creator, but it might be worth a look.