The Path of Khan 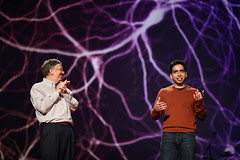 Image by jurvetson via FlickrOne math resource that has gotten an increasing amount of attention in the past year is the Khan Academy.  Created by MIT grad Salman Khan, the Khan Academy currently boasts a collection of nearly 2,500 Math and Science video tutorials.   His videos have been viewed on YouTube over 73 million times and are used by students, tutors, and math instructors around the World.  Khan Academy has been featured on NPR, CNN, and PBS to name a few, and Bill Gates uses the videos with his kids.  This is quite a mark made by a nonprofit led by one individual, but what is it about Khan Academy that leads to this kind of attention?

Perhaps it isn't quite this dramatic, but while some math educators embrace Khan Academy - others discount its influence.  Of all the disciplines, I think math instructors are known as the most traditional.  Upon closer look, Salman Khan's instructional approach isn't that different from what you would find in the classroom setting.  Instead of a chalk or whiteboard, he uses a Smooth Draw writing pad with a black background.  His diagrams and notes are all done by hand in different fluorescent colors.  There are presentation tools available that are much better than his crude script.  He is clearly a remarkably intelligent individual but what is it that makes his work stand out?

It's the technology - or rather, how it is used.  The origin of Khan's tutorials came from his desire to help relatives and friends more efficiently, so he posted them on YouTube.  Now he could create the tutorials when he had the time and his students could view them when they wanted.  The online distribution alone provides an individualized instruction through its convenience.

Online videos can not only be shared, but they can be paused, downloaded, and linked to.  Perhaps the college professor doesn't have the freshman's full attention in math class.  The student may be tired, doodling cartoons, or thinking about the girl across the room.  With Khan as his instructor, he can watch the video later.  He can stop it to answer the phone, and he can replay it as many times as he needs to until he understands the epsilon delta limit.

The other thing that Salman Khan provides with technology is a vast catalog of topics in different subject areas.  Enter a search term and you should find a video or several videos on the concept.  Having the familiarity of the same instructor helps as well, I think, or perhaps he provides a different instructional viewpoint from what is found in the classroom.  He has said that he envisions his teachings as a 1:1 experience and this comes through in the videos also.  Technology has provided millions of students their own personal tutor.

What I hope Khan's greatest legacy is that he has created the influence necessary to force textbook publishers to digitize.  Some math professors have decided to go without textbooks, and rely on Khan Academy to supplement their instruction.  The technology has existed for some time, so perhaps it is only the profit margin that has prevented a widespread adoption of this.  Khan Academy proves that valuable instruction can be provided globally in a cost efficient manner, conveniently with technology.

Posted by Thomas Petra at 2:40 AM No comments:

Image via WikipediaI've been following the news of the hurricane traveling up the eastern seaboard.  Hurricane Irene's intensity seems to have peaked long ago and it is starting to deteriorate into what we call around here a "banana bender".  It sounds like a wet storm so I suppose flooding is the worst concern.
Living on Guam for the past 22 years has exposed me to over 15 major typhoons- as they're called in this part of the world.  I've been through three Super Typhoons: Yuri, Paka, and Pongsonga.  A super typhoon has maximum sustained winds of 150mph or greater, comparable to a category 5 hurricane.
It's been almost 10 years since we had our last typhoon.  I don't know how long our luck will last but we'll be ready for it.  Guam is situated in a convergence region so it has seen many typhoons in its history.  Most of our structures are built out of concrete because anything less gets torn apart.  Guam doesn't have many tall trees for the same reason.  But with the extended lull in activity the island's vegetation has had a long holiday.  I'm sure the next typhoon that comes along will cause a big mess in this regard.
The first lesson I made for Real World Math was the Typhoon Project.  Using Google Earth as a typhoon tracker was an obvious choice when I first saw it.  I saw it as an interactive map of a weather event.  I'm sure I wasn't the first person to use a mapping graphic in that way, but it seemed original to me back in 2007.  Now I see similar graphics for Hurricane Irene in all of the news' sites I've been reading.  The National Weather Service has a kmz generator which, as I understand it, can create radar overlays for Google Earth.  I haven't tried it yet so let me know what you think.

Posted by Thomas Petra at 10:12 PM No comments:

Thank you Aaron Slutsky for this gem.  This is a quick and easy way to format images, videos, and text for your Google Earth placemarks.  Can't wait to see how it handles text and color formatting.

Image via WikipediaAs I was researching material to form the ideology of Real World Math, I tried to find sources that would support the best methods of math instruction. There exists a great number of studies that present the failures of math education, but a disproportionate amount that provide the answers.  One only needs to visit their library to find that the section on mathematics takes up the least shelf space.  And so it happened that I was in a university library that I found a publication of Professor Morris Kline's Why Johnny Can't Add, literally gathering dust.  Although it was written several decades earlier, I had found an influential voice in my view on mathematics.

Kline was professor of mathematics at NYU, and from the 1950's-70's he was a rebellious voice in higher education.  He expressed strong beliefs that the math curricula was misguided and ineffectual, taking particular aim at the New Math of his time.  What I found so striking about his words was that his criticisms seemed just as relevant today as they did half a century ago. There are many of his views I could share with you but for this post I will select one.

Professor Kline believed that perhaps the greatest failing in math education occurred when it was divorced from the physical sciences.  The date of this event may be hard to determine, but it probably occurred when a publisher created a textbook entitled Algebra and another Chemistry.  He observed that many of the great mathematical minds of history were individuals who studied science; Descartes, Newton, and Gauss, to name a few.  Throughout history, mathematics was the means in which scientific observations and deductions were made, but somewhere along the way formal education separated them into distinct subjects of study.  Mathematics became a separate field of inquiry.

Kline felt that the failure of math education was not the fault of the student but of the material they were learning.  Without science, or a connection to the physical world, math had lost its purpose.  Learning mathematics for the "beauty of math" or the goal of learning more purposeless material would not benefit the majority of students.

What should we teach? We want material that will provide motivation, sustain the interest of the student, exhibit the methods of the operation peculiar to mathematics, and demonstrate the chief values of mathematics. I believe that the answer is to tie mathematics closely to the study of the physical world. I do not mean that mathematics should be buried in some corner of a physical science course but rather that we should motivate interpret, and apply mathematics through fundamental physical problems and of course include wherever possible the broader implications, largely cultural, of what mathematics has accomplished. Mathematics derives from the study of nature and is valuable mainly because of what it returns to nature. - Kline 1955
If you are familiar with my site, then you can see how I took Professor Kline's words to heart.  I have tried make connections from math to the physical world so that students can see how concepts are applied.  Many of RWM's activities are suggested as cross-curricular content for science; perhaps there should be more.  What I would suggest to you is that you find a way to reunite the disciplines this year in some way.  Talk to your fellow teachers and try to make correlations in your instruction.  Show the students how ideas and knowledge are related so that they can realize their learning has purpose.

Posted by Thomas Petra at 11:01 PM No comments:

Image via WikipediaHope your summer was restful and you are ready to start a new school year.  Although I haven't posted any new lessons for a while, it doesn't mean that I haven't kept myself busy.  I've had a number of projects I've been working on in the past months but I'm eager to add some fresh content to the site.  I'll insert my usual plea for lesson suggestions here.  Please email if you have something you'd like to see on the site (4realworldmath@gmail.com).

Truth be told, I have a large PBL activity that I'm currently working on; I'm still researching and collecting resources.  Once I get over the hump of obstacles, the work will go much more quickly.  I have a few ideas for Primary age lessons and I'd like to get to Mars this year.  I'd like to add a Problem of the Day feature; I've been collecting material for that throughout the summer.  So try out the lessons that are available and keep an eye out for new content coming this year.  Announcements are also made via Twitter (http://twitter.com/RealWorldMath).

If you are just getting your feet wet with Real World Math lessons or if you have a new group of students that will be using Google Earth for the first time, then I will direct you to a previous post: Back to School.  You'll find some tips and suggestions on which RWM lessons to use to start out the year.

Finally, I've created an About.me contact page (http://about.me/RealWorldMath).  This should make it easy for you to recommend RealWorldMath to other teachers - so why don't you?

Check out my about.me profile!

Posted by Thomas Petra at 11:04 PM No comments: