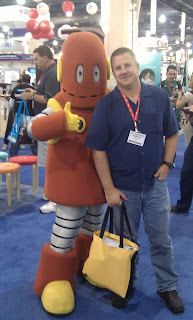 As I mentioned in a previous post, one of the best things about ISTE conferences is you get a chance to meet face to face with the people whom you've only had a cyber connection with.  I'd be remiss if I didn't mention the individual that I was most anxious to meet - Moby.  Yes, that's right; Moby from BrainPop was the first person I sought out when I got to the convention hall.  My two girls are big fans and so I wanted to make sure I got a photo op and few trinkets.  BrainPop seems to keep growing and growing.  Every time I view the site it seems to have more content and it continues to win award for excellence.  BrainPop's explains concepts in a very concise manner with animations designed for children ages 3 and up,  If you have students in grades K-8, then you will want to take a look at what the site has to offer for educators.  See you next year, Moby.
Posted by Thomas Petra at 1:43 AM No comments: 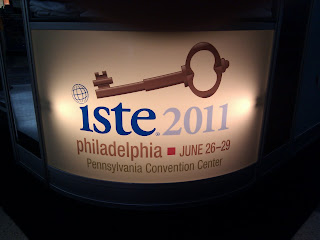 It's taken awhile, but I'm ready to share my thoughts on this year's ISTE conference.  I've been traveling for the past 3 weeks so I have a lot of sorting out to do.  As usual, I've come away with new ideas for the upcoming year, made some great contacts, and gained a sense of validity to the work I do.

The majority of my time was spent in Boston but the train ride to Philadelphia was a highlight.  I've never seen that stretch of New England before so I enjoyed that portion of the trip.  Traveling by train was much more enjoyable than traveling by plane!  Philadelphia proved to be a great host city.  I don't think I have ever seen such a concentration of places to eat with a tremendous variety to choose from.  As expected, the conference center was huge so that gave an opportunity to work off some calories.

The conference is pretty overwhelming.  On any given day, you have hundreds of choices to follow.  I like going to the Exposition Hall and seeing all of the vendors and their products.  I like to think that I gain a better sense of what tools are out there and what the coming trends are going to be.  As far as the latter, I think you'll see interactive projector systems in place of the whiteboards, and an even greater increase in shared resource learning systems.  Safari Montage is still my dream application.  A lot of systems now have social networking as a component.  Instead of hearing how all of the States' standards are addressed in learning systems, this year the word was "Core".

I found it harder to follow the program this year.  I attended a disappointing BYOL session (in large part because of the lack of Internet connection) and I browsed some of the Poster sessions.  It's always great to see the passion that people bring with their work.  I noticed a large increase in the amount of math related content this year which is encouraging.  The second day was a bust for me.  Because of a morning keynote, the sessions didn't start until 10am.  Add to this a 3 hour stint of volunteering in the afternoon and most of my day was gone.  There's always conflicts in your schedule.  If I go next year, I would like to connect more with the special interest groups and the informal sessions that spring up throughout the day.

The Real World Math poster session went well enough.  I was prepared with my materials, but 125 pamphlets proved to be not enough.  The poster sessions were tucked away on the side of the conference hall.  This was disappointing because they didn't get the same amount of traffic as they did in Denver.  My session was on the last day around lunchtime so the attendance was lower than what I had hoped for.  I was able to share my site with many who were unaware of it.  I'll have to hope that exponential power of networks will help spread the word further.

Overall, it's hard to justify the costs of travel to events like these.  Even harder to quantify the gains you take away.  Ironically, the same technology that we are promoting enables us to connect year-round outside of conference halls.  Still there's something special about the opportunity to meet face-to-face with over ten thousand like minded people.

Posted by Thomas Petra at 5:38 PM No comments: