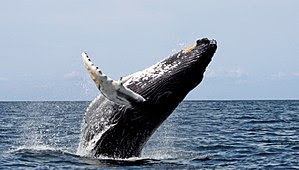 Image via WikipediaI'm happy to announce a new activity has been added to the website. Whale Watch has students analyzing the sightings data of right whales around Cape Cod.  I think data and statistics probably don't get enough attention in most math programs, so hopefully this will help with that effort. Advances in technology have allowed for a greater amount of information to be shared and studied by more people. To me, data analysis is an important 21st century skill.

You probably wouldn't be surprised to learn that I went on a whale watching cruise out of Boston last summer. There were several things I found interesting on that trip (besides the whales, that is). First, the whale watching companies promise that you will see a whale on your trip or you get a free ticket for another day. I was curious how that worked out money-wise for them but my inquiries didn't gather much information. They shared with me that the repeat visitor normally brings additional visitors so that goes to their advantage. Other than that, they were tight-lipped about the numbers.

The other thing I thought would be interesting to learn is how they find the whales.  It's a big ocean after all and even though the whales frequent some regions it isn't always easy to find them.  The Stellwagen Bank is one such area where whales can be found in Massachusetts Bay.  I started to get the idea for a lesson to find Humpback whales (like our friend in the photo above) and decided to follow up on it.  The only problem was that I wasn't able to find any data.  What I did come across was the sightings data for North Atlantic Right Whales.  I learned that they aren't as plentiful as their cousins, in fact they are one of the most endangered whale species on the planet.  Thanks to NOAA and the Northeast Fisheries Service Center I was able to find a treasure trove of data.

I had originally envisioned students plotting the sightings into Google Earth, but after I had plotted the 250+ pieces of data I realized that wasn't practical.  I went over the entire list several times making modifications with the settings and concluded that this aspect wouldn't be a positive experience for the students.  In the end, I've focused the students more on analyzing the data than plotting it in Google Earth.  One thing I like about this activity is that I state that there are no prerequisite math skills needed.  That seems odd at first but when you are viewing the data in its different forms you realize that you aren't performing any math calculations.  I'm sure statisticians could do a lot more with the numbers, but primarily you're asking the students to sort the data in different ways and look for patterns.  The data can be examined not only by the location the whales were sighted but also the month and the number of whales in the group.  These characteristics alone seem to suggest a great deal of information.  Still, mathematical concepts such as averages, range, measurement, and number theory have a place in the exercise.

Whale Watch is also an opportunity for students to participate in a truly meaningful math lesson.  The right whale is an endangered mammal and its numbers are affected by ship strikes and entanglement in fishing gear.  The activity has students mirroring what researchers do in real life and I like how it is basically an open-ended question.  Protecting the whales while allowing humans to use the ocean for commercial purposes is a problem that doesn't have a clear cut answer or solution.

I hope you and your students enjoy Whale Watch.  I had planned on getting some new lessons on the website in August, so I'm sorry for the delay.  Some of my summer tasks took longer to accomplish than I had planned, but now I'm free and clear to focus more attention on the site.

Posted by Thomas Petra at 4:39 PM No comments: 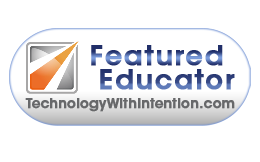 Thanks to Jac de Haan for the opportunity to spread the message.
Posted by Thomas Petra at 11:01 PM No comments:

Image via Wikipedia
I just read through Sylvia Martinez's four part blog post Khan Academy and the mythical math cure, and I have to say that I agree wholeheartedly.  Posted back in April on the Generation YES blog, she examines the pedagogical effectiveness of the Khan approach while presenting the constructivist viewpoint.  As the publisher of a website that promotes constructivism in the classroom, I was embarrassed to have previously posted a somewhat positive review of Salman Khan's work.
Perhaps to my defense, I did not so much as endorse his videos as I embraced the use of technology as an instructional tool.  In The Path of Khan, I wrote that the videos provide an option for individualized instruction and that their popularity could be the catalyst needed to digitize textbooks.  But while I suggested that Khan's instruction wasn't that different from a classroom lecture, Ms. Martinez astutely points out that this use of technology doesn't either.  Whether the pupil is in the classroom or watching a video at home, this approach treats the learner as a passive participant.  Again as a proponent of active learning, I regretted my previous words.  Maybe I was just glad to see another approach to math instruction gain popularity.  I could go on and try to retract my words but let me just say that I agree with what she said.

Constructivism is the belief that learning is best achieved when the individual uses his/her previous experiences to create new meaning, or as Sylvia puts it, "People learn by reorganizing what they already have in their head and adding new information that makes sense to them.  No doubt this is at odds with teacher-dominated instruction, but is there room for both?  Can a learner take an active and passive role?  Ms. Martinez seems to believe that it can't be both and I'm not sure I agree.  I think meaningful learning is a personalized process but I don't discount the value of teacher instruction altogether.  Would she presume that we can't learn anything from reading a book, watching a movie, or listening to a lecture?  To be fair, her points are directed at math learning which leads to a lengthy discussion in itself.  I'm referring to the question of what is necessary in a math education, but I won't go down that path right now.

I will recommend her post as a must-read for math instructors (instruction?).  Like Dan Meyer's work, I found it further developed beliefs I already had (constructivism?) and provided inspiration for my future efforts.  I won't discount Khan's work altogether; his intention is to individualize learning which is a worthy goal.  Perhaps what the path of Khan shows us is that pedagogy isn't changed just by using technology.  It's going to take more than technology to reform education.  I'm just glad we are moving forward.

Posted by Thomas Petra at 2:05 PM No comments: